In Western culture, baldness isn’t exactly something that men flaunt. As a matter of fact, it’s something that men vehemently combat – not physically – but with their wallets. The hair loss treatment industry is worth billions of dollars, and it has benefited immensely from the societal stigma of bald men. But is all of that changing? If you’re balding, should you embrace it, or go a step further and shave your head? 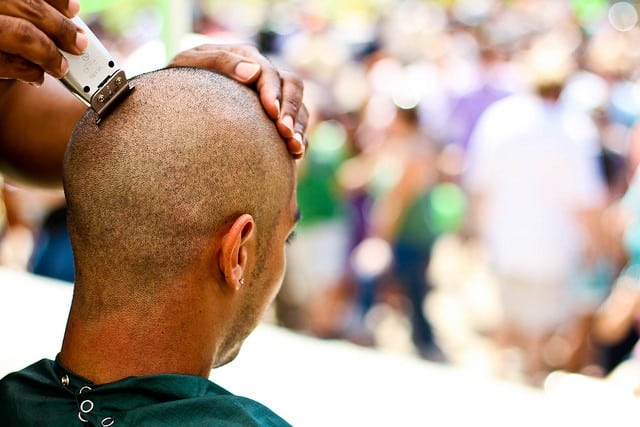 As men across the globe shop for Rogaine, discuss hair implants, and look for any excuse to wear a baseball hat, a new breed of pro-bald men is rising up from a pile of Donald Trump’s awkward, lifeless toupées and embracing their clean and smooth heads. And, to the surprise of many, they’re doing it pretty darn well.

Why You Should Shave Your Head

A recent study by the University of Pennsylvania’s Wharton School, one of the top business schools in the nation, revealed that bald men are perceived by others as manlier, more dominant and powerful, and as better leaders than men with manes. The study, which was conducted by lecturer Albert Mannes, was broken down into three tests. The first experiment gathered almost 60 participants and asked them to rank the photos of similarly-aged men, both bald and not, on how powerful, influential, and authoritative they looked. Overwhelmingly, the bald guys ranked higher in all categories.

In the second arm of the study, the participants were shown eight digitally-altered photos of four men – for each man, there were two photos: one photo of the man without hair and another with hair. In the end, the bald men were ranked as more dominant, 13% stronger, and, interestingly, an inch taller than their hairy-headed counterparts.

Related Article: Why Burst Training is Your Best Fat-Burning Workout

People Will Think You’re a Leader

In the third and final segment of the study, 344 participants were given written and verbal descriptions of men; some guys were described as having thick hair and others as having shaved heads. However, these varying physical descriptions didn’t create any discrepancies in results – the consensus agreed once again that the bald men were more masculine, stronger, more dominant, and had higher potential for leadership.

The study also found a correlation between men with thinning hair and those who had just shaved it all off, with Mannes stating, “The shaved look is more attractive than the visibly balding look. So men suffering natural hair loss may enhance both their dominance and attractiveness by shaving.” For balding men who have been contemplating what to do with their hair (or lack thereof), perhaps shaving it all off is the best bet.

Related Article: Are You Programmed to Be Broke?

When the overarching theme presented by the study is considered, it seems that bald men may have the upper hand in business. Power, dominance, strength, and leadership potential are all characteristics of successful individuals not just in corporate America, but in all aspects of society. Among the numerous men who have embraced baldness are Amazon head-honcho Jeff Bezos, Michael Jordan, General Motors CEO Daniel Akerson, Andre Agassi, venture capitalist & Netscape founder Marc Andreesen, rapper Pitbull, and Microsoft CEO Steve Ballmer. These men may not have perfectly coiffed hair, but they’ve got influence, money, and the perceptional qualities necessary to thrive in modern America.

How to Shave Your Head

If you wish to follow the paths of these visionaries and celebrities, you may want to grab a pair of clippers and shave your head. Todd Greene, CEO of HeadBlade, has the following advice for these men:

“Head shaving is a very personal experience and the procedure, and results, can vary greatly. There is no “4 out of 5 dentist” analogy. It pretty much is “to each his own” or “whatever works for you, keep doing it.” Asking others who shave will give you great insight into the different methods, but ultimately, after much testing, you will have to find your own head shave routine.”

For those men who want to go the shaved head route, here are 3 basic steps to keep in mind:

1. Prepare. Trim your hair down to stubble with a hair clipper – you want as little hair as possible to make for an easier shave. Then, exfoliate to get rid of any nagging hairs that may get in your way. Next, it’s important to acquire a high-quality razor – this will make for a more convenient experience. Once shaving cream, lubricant, or gel is applied, it’s time to get down to business…

2. Shave. Accomplishing a clean and painless shave takes patience, but preparing properly and taking your time can ensure a stress-free process with great results. Shaving with the grain of your hair (the direction in which your hair grows) causes less tension and irritation. Also, try shaving during or after you have taken a shower to make the experience go smoothly; warm water opens the pores and allows for a gentler shave.

3. Post-Shave. Depending on your skin type, aftershave or moisturizer may be necessary to prevent dryness or razor burn. Ideally, you should use a moisturizer that nourishes your skin and doesn’t clog your pores. Also, avoid using an alcohol-based aftershave – these will only cause further irritation. According to BeeBald CEO Dennis Fisher, a post-shave balm can put the necessary finishing touches on a freshly shaved head:

“Using a post-shaving ointment will calm, soothe and immediately improve the physical appearance of nicks, bruises, blemishes and other irritations caused by shaving. Look for a natural product that will provide fast relief to irritated skin and help to restore healthy balance to the entire head and face.”

By contributing a bit of your time and approaching the process with patience, you can reap the benefits of a shaved head.

Want to get inspired to live your best life? Sign up now for our best stories on success and motivation, sent straight to your inbox (it’s free).