Top Posts
24 Things That Will Make You Laugh (Even...
How To Deal With Bitter People
Having Family Problems? Here’s How To Fix Them
20 Easy Ways to Protect the Environment and...
5 Surprising Benefits of Training Your Glutes
5 Reasons Warm Weather is Good For Your...
8 Ways To Have A Super Relaxing Weekend
The Importance Of Being Grateful
QUIZ: What Workout Are You?
7 Healing Foods That Boost Metabolism
You are Here: Inspiyr > INTERESTING > 28 Inspirational Quotes from Arianna Huffington About Life, Fear and Motherhood

28 Inspirational Quotes from Arianna Huffington About Life, Fear and Motherhood 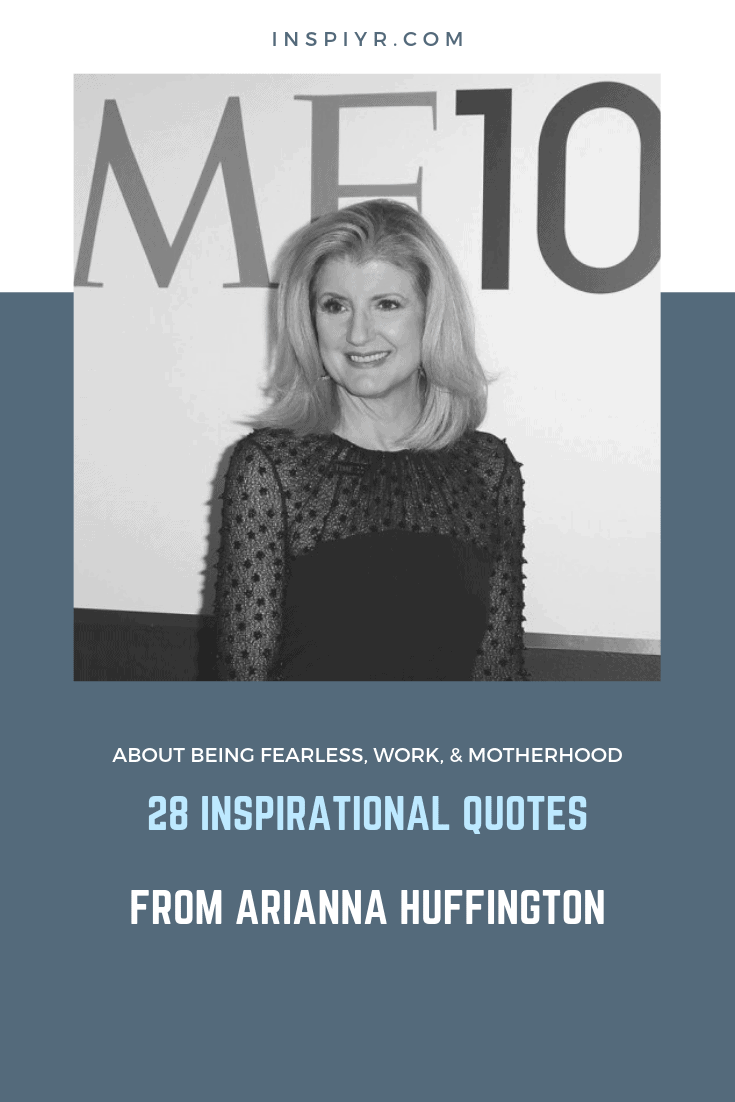 Arianna Huffington is the founder of The Huffington Post, one of the largest news sites today.

Huffington sold the Huffington Post for over $300 million several years ago. Even after the sale, Huffington continues to contribute articles to her news creation and writes books and other articles.

Although Huffington is most known as a fierce entrepreneur and writer who pushes the limits in new endeavors, one of her defining roles that she talks and writes about is the joy and struggles with motherhood.

Here are 28 inspirational and fearless Arianna Huffington quotes about work, life, and motherhood:

Fearless Quotes About Life and Work

.1.  “Give me a place to stand and I will move the world.” – Arianna Huffington

“But you have to do what you dream of doing even while you’re afraid.” – Arianna Huffington

3. “Why do we spend so much of our limited time on this earth focusing on all the things that our eulogies will never cover?” – Arianna Huffington

5. “We may not be able to witness our own eulogy, but we’re actually writing it all the time, every day.” – Arianna Huffington

“Countless things in our daily lives can awaken the almost constant state of wonder we knew as children. But sometimes to see them we must look through a different set of eyes.” – Arianna Huffington

7. “Just change the channel. You are in control of the clicker. Don’t replay the bad, scary movie.” – Arianna Huffington

8.  “We need to accept that we won’t always make the right decisions, that we’ll screw up royally sometimes – understanding that failure is not the opposite of success, it’s part of success.” – Arianna Huffington

10. “Today we often use deadlines—real and imaginary—to imprison ourselves.” – Arianna Huffington

11. “Don’t just climb the ladder of success – a ladder that leads, after all, to higher and higher levels of stress and burnout – but chart a new path to success, remaking it in a way that includes not just the conventional metrics of money and power, but a third metric that includes well-being, wisdom, wonder, and giving, so that the goal is not just to succeed but to thrive.” – Arianna Huffington

12. “We all have within us the ability to move from struggle to grace.” – Arianna Huffington

13. “Treat people like family, and they will be loyal and give their all.” – Arianna Huffington

14. “Meditation is not about stopping thoughts, but recognizing that we are more than our thoughts and our feelings.” – Arianna Huffington

“Too many of us leave our lives—and, in fact, our souls—behind when we go to work.” – Arianna Huffington

16.  “Liberation is an ever-shifting horizon, a total ideology that can never fulfill its promises. It has the therapeutic quality of providing emotionally charged rituals of solidarity in hatred – it is the amphetamine of its believers.” – Arianna Huffington

17. “Angels fly because they take themselves lightly.” – Arianna Huffington

18. “Fearlessness is like a muscle. I know from my own life that the more I exercise it the more natural it becomes to not let my fears run me.” – Arianna Huffington

“The fastest way to break the cycle of perfectionism and become a fearless mother is to give up the idea of doing it perfectly – indeed to embrace uncertainty and imperfection.” – Arianna Huffington

20. “But, in fact, there is nothing that can bring you closer to fearlessness about everything else in the world than being a parent – because everyday fears – like not being approved of – pale by comparison to the fears you have about your children.” – Arianna Huffington

21. “Fearlessness is not the absence of fear. It’s the mastery of fear. It’s about getting up one more time than we fall down.” – Arianna Huffington

“I think while all mothers deal with feelings of guilt, working mothers are plagued by guilt on steroids.” – Arianna Huffington

23. “The fastest way to break the cycle of perfectionism and become a fearless mother is to give up the idea of doing it perfectly – indeed to embrace uncertainty and imperfection.” – Arianna Huffington

24. “Trying to be Supermom is as futile as trying to be Perfect Mom. Not going to happen.” – Arianna Huffington

25. “A purpose of human life, no matter who is controlling it, is to love whoever is around to be loved.” – Arianna Huffington

“The more we refuse to buy into our inner critics – and our external ones too – the easier it will get to have confidence in our choices, and to feel comfortable with who we are – as women and as mothers.” – Arianna Huffington

26. “There’s no love more intense than the love we have for our kids – and where there is intense love, there is also intense fear lurking beneath the surface.” – Arianna Huffington

27. “There is nothing like becoming a mom to fill you with fear.” – Arianna Huffington

“You need to be able to nurture yourself in order to be a good mother, good at your job, good at servicing your community. I really believe women can do it all, but they can’t do it all at the expense of their health, their sleep, and their sense of well being.” – Arianna Huffington

Having Family Problems? Here’s How To Fix Them