Top Posts
24 Things That Will Make You Laugh (Even...
How To Deal With Bitter People
Having Family Problems? Here’s How To Fix Them
20 Easy Ways to Protect the Environment and...
5 Surprising Benefits of Training Your Glutes
5 Reasons Warm Weather is Good For Your...
8 Ways To Have A Super Relaxing Weekend
The Importance Of Being Grateful
QUIZ: What Workout Are You?
7 Healing Foods That Boost Metabolism
You are Here: Inspiyr > WORLD & ENVIRONMENT > Chris Kyle: An American Legend, Stolen from Us All

Chris Kyle: An American Legend, Stolen from Us All

This past Saturday, while most Americans were preparing for the upcoming Superbowl, one of the nation’s hero’s was gunned down in the latest tragedy of “The Long War.” Former Navy SEAL sniper Chris Kyle was killed at a shooting range in Glenn Rose, Texas on early Saturday morning, along with one of his friends. Kyle’s alleged shooter, a former Marine who suffered from Post-Traumatic Stress Disorder (PTSD), was arrested later that day. Chris Kyle was only 38 years old and leaves behind a wife and two young children. 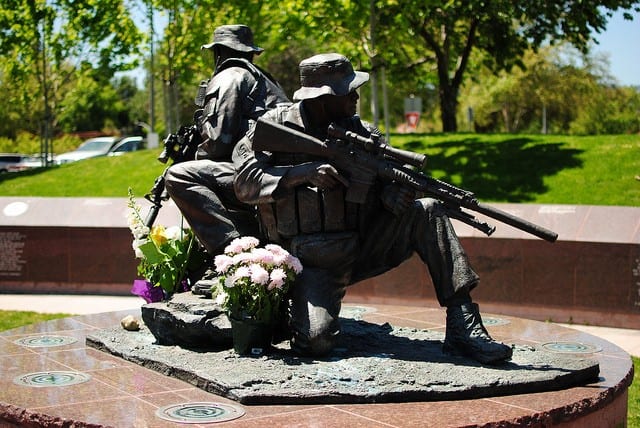 Chris Kyle was the deadliest sniper in recorded American history and, after leaving the military, became an advocate for veteran and combat-stress awareness. Sadly, Kyle’s campaign for increased mental health promotion ultimately led to his death as a fellow veteran whom he was attempting to counsel killed him. After surviving some of the most brutal urban combat in the 21st century and being wounded several times in the line of duty, Kyle’s life was cut short at the place he felt most at home, a rifle range in his home state of Texas. Although he was often a very controversial figure, most people can agree that Chief Kyle served his country courageously in a time when courage was most needed.

Chris Kyle was born in Odessa, Texas on April 8, 1974. From a very early age, Kyle learned shooting and hunting skills from his father, spending countless hours on the range and in the woods. He also stayed active by participating in bronco rodeo tournaments across Texas, until a severe arm injury forced him to stop. He became interested in joining the United States Marine Corps but decided to enlist in the United States Navy after a recruiter told him about Sea Air and Land (SEAL) teams. Initially rejected due to the after-effects of his rodeo injury, he was given the chance to enlist in the Navy in 1999.

After graduating from the infamously difficult Basic Underwater Demolition/SEAL (BUD/S) training, Kyle was sent to Special Warfare Sniper School, where he learned how to perform the complex and delicate operations of a special forces sniper team. He was then sent to the sniper element of SEAL Team 3 and was deployed to Iraq four times. During his time in Iraq, Kyle fought in the Second Battle of Fallujah and dozens of other campaigns around the country. He reported killing 255 insurgents, including 40 in Fallujah alone. The Pentagon has confirmed 160 of these kills, making Kyle the most lethal sniper in American military history. He became so feared by his enemies, that Iraqi militant groups dubbed him Al-Shaitan Ramad (English: The Devil of Ramadi) and put an $80,000 bounty on his life. Kyle was shot and wounded twice while in Iraq and caught in IED (Improvised Explosive Device) explosions on 6 separate occasions. For his actions overseas, Kyle was awarded two Silver Stars, five Bronze Stars, and a host of other decorations. He rose quickly in the ranks, eventually attaining the rank of Chief Petty Officer before separating from the Navy in 2009 to spend more time with his family.

After leaving the military, Kyle founded the paramilitary contracting firm Craft International. The company provides security and sniper training to professional security experts in both government and civilian positions. He also founded FITCO Cares Foundation, a non-profit organization that provided in-home fitness equipment and counseling for disabled veterans and their families. Kyle was thrust into the national spotlight in 2012 with the release of his autobiography American Sniper. The memoir’s release sparked controversy, as it was seen as breaking the “code of silence” maintained by SEALs and combat veterans in general. There were also concerns that Kyle’s book may have given away classified information. The Department of Defense has disciplined special warfare operators for revealing military secrets in the past, but Kyle was immune to punitive actions as a discharged service member. In August 2012, Kyle appeared on the celebrity-reality television show Stars Earn Stripes. This show featured celebrities and their mentors–all former special forces operators, including Kyle-simulating combat missions. The show was critically panned, protested by peace activists, and had horribly low ratings, but Kyle defended his role on the show as an attempt to raise money and awareness for struggling war veterans.

On the morning of February 2,2013, Kyle and his friend Chad Littlefield were shot and killed while on a shooting outing near Ft. Worth with a traumatized veteran. The alleged shooter, former Marine Corporal Eddie Ray Routh, was arraigned by law enforcement on two counts of capital murder. Routh is 25 years old and served four years in the Marine Corps, including tours of Iraq and Haiti. According to psychologists, his mental disturbances may have been brought on by his time spent in the military. The Texas Department of Public Safety has launched a full investigation and has vowed to deliver justice.

While Chris Kyle was not the model “Silent Professional,” he did a tough job in a difficult time. Though uncharacteristically outspoken for a Navy SEAL, Kyle used his pseudo-celebrity status to help those who had given everything they had for their country. His legacy can endure in the hearts of all Americans who look to serve a cause higher than themselves.

5 Videos To Help You Get Motivated