Top Posts
24 Things That Will Make You Laugh (Even...
How To Deal With Bitter People
Having Family Problems? Here’s How To Fix Them
20 Easy Ways to Protect the Environment and...
5 Surprising Benefits of Training Your Glutes
5 Reasons Warm Weather is Good For Your...
8 Ways To Have A Super Relaxing Weekend
The Importance Of Being Grateful
QUIZ: What Workout Are You?
7 Healing Foods That Boost Metabolism
You are Here: Inspiyr > GET HEALTHY > 7 Reasons Why Quinoa Is Awesome

7 Reasons Why Quinoa Is Awesome

Have you heard of quinoa?

If not, you may be wondering, “How in the world do I pronounce that?” I’ll help you out with that right now: “KEEN-wah.” There you go.

But don’t let the confusing pronunciation turn you off this fabulous food. It’s quickly becoming all the rage in kitchens all around the world. In fact, the Food and Agriculture Organization of the United Nations had declared 2012 “The International Year of the Quinoa.” 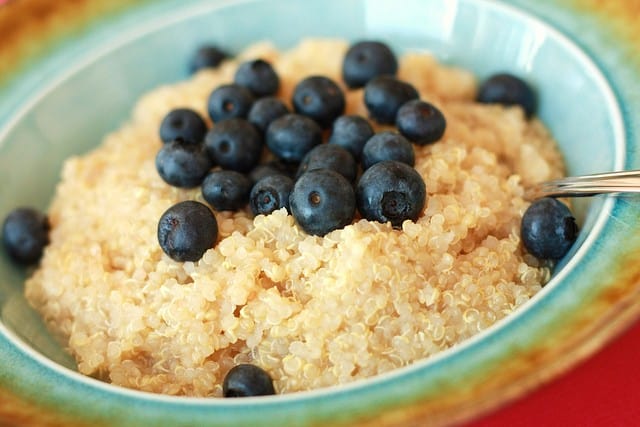 Quinoa is a tiny seed from a vegetable closely related to beetroots and tumbleweeds. The seeds can be cooked much like rice to make them fluffy and grain-like.

The superfood dates back to approximately 5,000 years ago, when the Incas made it a staple of their diet. They considered the seed to be sacred and thus dubbed it the “mother seed.”

And for good reason. There are quite a few health benefits of quinoa that may make you consider adding it to your diet.

Celiacs everywhere can celebrate—quinoa is gluten-free, which may be surprising because it tastes like a grain and can often be used in place of one. However, as stated earlier, it is not a grain; it’s a seed, and is absolutely gluten-free.

2. It’s a great source of protein

Quinoa is very rich in protein. According to the United States Department of Agriculture, one cup of cooked quinoa contains 8 grams of protein.

3. Quinoa is high in fiber

According to the USDA, quinoa contains 12 grams of fiber per cup, almost twice as much as most other grains. Fiber intakes in the U.S. are less than half of the recommended levels on average, which is a problem because people who eat lots of fiber are at significantly lower risk for developing coronary heart disease, stroke, hypertension, diabetes, obesity, and some gastrointestinal diseases. Plus, fiber can help prevent constipation, which may be, ahem, relieving for you to know.

4. It can help with migraines

If you suffer from migraines, quinoa can help to relieve your pain. According to Green Living author Diana Herrington, the seed is a good source of Vitamin B2 or riboflavin, which prevents migraines by “improving the energy metabolism within the brain and muscle cells.” Riboflavin also works as an antioxidant and is important for normal vision.

5. Quinoa can keep you from overeating

Quinoa can help keep the temptation to snack at bay. The water-absorbing ability of high fiber and the slow digestion of protein both can help keep you feeling fuller for longer. Since quinoa has such a high protein and fiber content, it’s a great food for keeping the munchies at bay.

7. Quinoa is rich in vitamins and minerals

In addition to fiber and protein, it is a good source of iron. According to the USDA, one cup of cooked quinoa has approximately 2.8 grams of iron, or 15% of your recommended daily intake. It also contains a little over 2 grams of zinc and 118 grams of magnesium, making it a good source of both.

Quinoa (remember, KEEN-wah!) is quite literally the food of the year. However, its popularity is not likely to fade. Quinoa is a delicious option for vegetarians, migraine sufferers, and celiacs, but it doesn’t matter your diet—it’s a healthy, filling addition for all. Not only is it a versatile dish, but it’s low-calorie, low-carb, and great source of protein, iron, zinc, fiber, and magnesium. What’s not to love?

Sammy Nickalls is the Content Manager at Inspiyr.com. She is an avid health nut and a lover of all things avocado.

8 Things All Healthy People Do

How to Start Over After a Loss

How DNA Fitness And Nutrition Tests Can Improve...