Top Posts
24 Things That Will Make You Laugh (Even...
How To Deal With Bitter People
Having Family Problems? Here’s How To Fix Them
20 Easy Ways to Protect the Environment and...
5 Surprising Benefits of Training Your Glutes
5 Reasons Warm Weather is Good For Your...
8 Ways To Have A Super Relaxing Weekend
The Importance Of Being Grateful
QUIZ: What Workout Are You?
7 Healing Foods That Boost Metabolism
You are Here: Inspiyr > GET MOTIVATED > What A Simple Cardboard Sign Can Teach Us About Making A Difference

Like thousands of people in cities all over the world, Kristin Pedemonti spends much of her time on the sidewalk holding a cardboard with letters written in faded black marker.

It’s a familiar scene. Most people walk by without even noticing her. Others see her and her sign but choose to walk past.

But the ones who do stop approach with a smile and have their lives changed for the better. Some just for the day. Some for a lifetime.

Why? Because Kristin’s sign isn’t asking for spare change, nor does it say “Will work for food.” In fact, it doesn’t ask for anything at all. 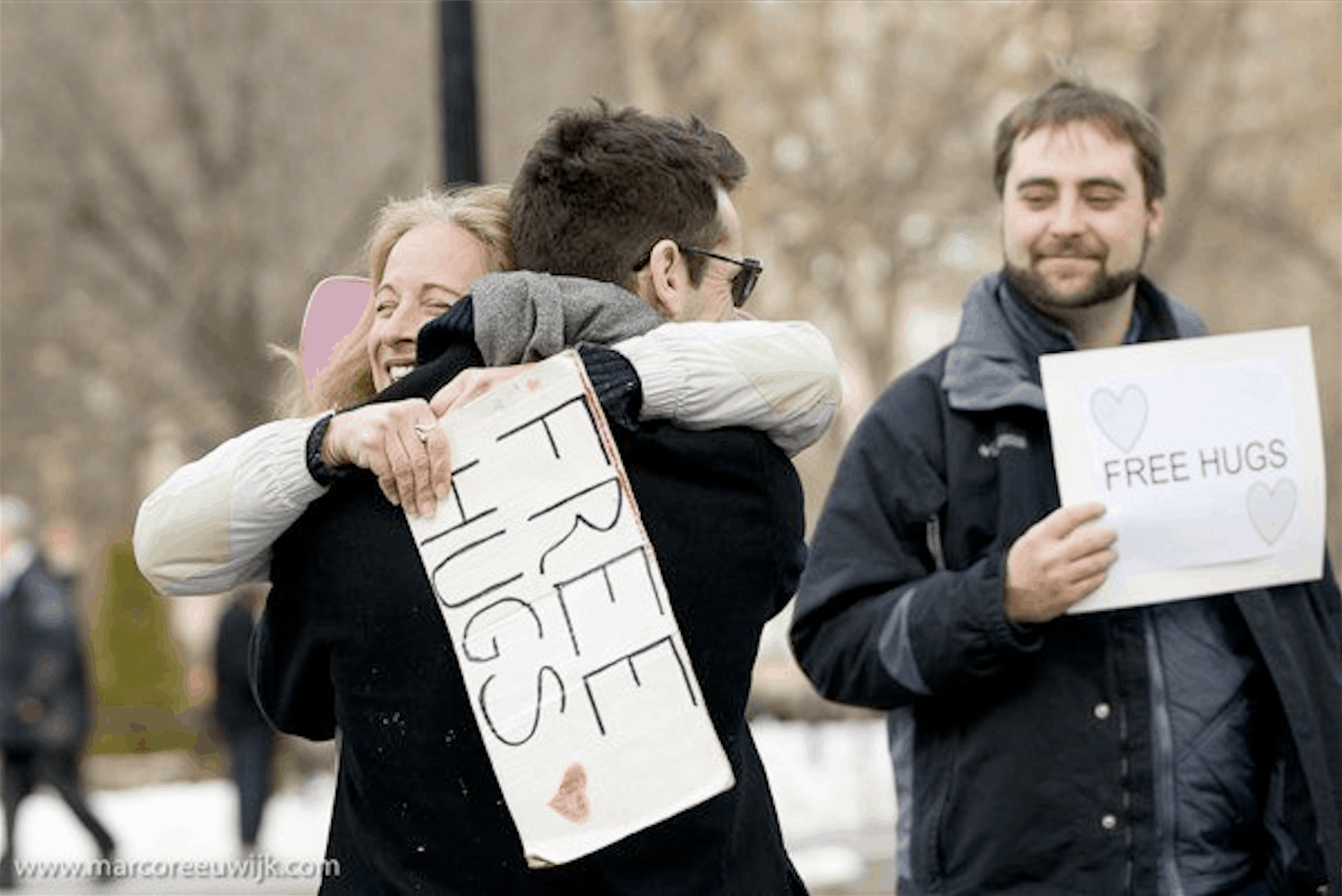 Kristin offers to give something, free of charge, with no strings attached. Kristin’s sign simply reads “Free Hugs.”

And that’s exactly what she gives. Free hugs, to anyone and everyone who wants one.

But it’s not just Kristin’s sign that will surprise you. She isn’t who you’d expect, either. Her offer to give free hugs isn’t a clever ploy to solicit donations.

Related: The Benefits Of Volunteering: 6 Reasons To Give Back

Kristin’s not homeless. In fact, she’s a successful actress and cause-focused storyteller who speaks to audiences all over the world.

So why does she give away free hugs? To bring more joy into people’s lives. Nothing more.

If you’ve ever been free-hugged by Kristin, you know what a real hug feels like. She doesn’t hug you like a stranger, timidly leaning in with one arm from a respectable distance.

Kristin’s hugs are full on: both arms and a tight squeeze, and she doesn’t stop hugging you until you stop hugging her.

The Most Powerful Hug In The World

The most powerful free hug Kristin ever gave was to a small boy in Paris. The boy and his mother watched her for several minutes as she stood with her sign. They eventually went on their way.

But a few minutes later, the boy came running back to her, leaped into her arms, and gave her an unabashed koala bear hug as only a small child can do.

The mother came trailing behind, with tears in her eyes. As Kristin put the boy down, she apologized and asked if she had done something wrong.

The mother explained that her son was severely autistic and rarely hugged even his own parents. Getting him to accept and express love was a lifelong challenge. Somehow Kristin had helped him take a new step.

Being a source of joy doesn’t take any special skills. And it doesn’t have to cost a lot of money. All it takes is the will to do it and the guts to share a moment with a stranger. Give away free hugs. Or blow bubbles. Or ride a trike in a superhero costume. Or whatever it is you want to do to bring joy to those around you. You pick. Just pick something.

And the next time you see someone on the streets holding a cardboard sign, give it a read. Whether you end up putting spare change in a tin cup or getting a free hug, the life you change might just be your own.

22 Great Gifts To Give Yourself This Holiday