Top Posts
24 Things That Will Make You Laugh (Even...
How To Deal With Bitter People
Having Family Problems? Here’s How To Fix Them
20 Easy Ways to Protect the Environment and...
5 Surprising Benefits of Training Your Glutes
5 Reasons Warm Weather is Good For Your...
8 Ways To Have A Super Relaxing Weekend
The Importance Of Being Grateful
QUIZ: What Workout Are You?
7 Healing Foods That Boost Metabolism
You are Here: Inspiyr > GET SUCCESS > The Do’s and Don’t’s of Making a Task List

That list can sometimes be far longer than you like, and sometimes it can be much nicer to just ignore it entirely. After all, who wants to see everything they have to do listed on one piece of paper? Talk about overwhelming!

However, there are many reasons to utilize a task list every day—if you do it right. It turns out there is, indeed, a wrong way to create one that could be sabotaging your efforts to get it all done. 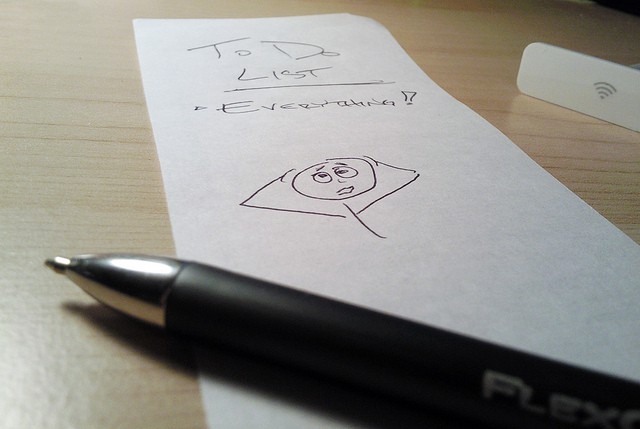 Related: How to Stay Motivated and Achieve Your Goal

Think about it this way: you might not be able to write the entire blog post before breakfast, but you can at least get the research done for it, right? Splitting up your larger tasks into smaller, more manageable tasks will not only be less overwhelming, but will help you plan out your day and tackle everything step by step.

In their book entitled Willpower: Rediscovering the Greatest Human Strength, psychologist Roy F. Baumeister and science writer John Tierney pointed out something shocking: one person typically has about 150 tasks they need to complete at a time. Newsflash: unless you’re a superhuman, you won’t be able to get 150 tasks done today.

But you just told me to break down my tasks and make them more specific! Of course my task list will be long!

You’re quite right. But consider before you start a task: is it worth it? In his article “5 Simple To-Do List Hacks to Help You Get More Done,” blog writer Brent Summers lists his four D’s: Do, Delegate, Defer, or Delete. Either leave it on the task list (Do), give it to someone else who would be more suited for it (Delegate), postpone it to another time (Defer), or just get rid of it (Delete).

Sometimes, it’s just not worth the stress – and it’s better to keep your list short and concise rather than filling it up with tasks that are simply a waste of your time.

Ever feel that nagging guilt when you’re procrastinating things you should be doing now? Yep, that awful feeling has a name: the Zeigarnik effect.

Researchers previously thought that the Zeigarnik effect existed purely to get you to do what you need to do, but a study conducted by Florida State University researchers found that merely making a plan can relieve the Zeigarnik effect and thus remove the drive to get your tasks done. That is, if you make your task list, the drive to actually complete the tasks can be lowered.

Related: How to Turn Procrastination into Action

Making up your list can sometimes be satisfying, but don’t stop there. Remember that the most important part of a task list is using it to get it done—not to give yourself the illusion of control.

4. Don’t: give yourself too much time

When creating your list, planning ahead is good, but research shows that giving yourself a bit of pressure can help. According to one study by researchers Dan Ariely and Klaus Wertenbroch, participants who had more time to complete the task performed worse than those who had less. A little pressure goes a long way – but don’t procrastinate too much!

5. Do: Learn from your lists

Don’t expect yourself to get 50 tasks done every day, but don’t discard yesterday’s list, either. Analyze it at the end of the day. What did you get around to? What did you procrastinate? What tasks do you find easier, and what do you find harder? Analyze your own patterns so you can better learn how to make a more effective list for you.

Related: 4 Ways to Learn Self Control

Baumeister and Tierney’s book tells a story about generals who were asked to write about their strategic approach to completing tasks. According to Baumeister and Tierney, all of them were stumped except for one, who simply said that she makes a list of priorities listed from top priority to lowest priority—and then she crosses out everything from three down.

Now, this is an extreme method of prioritizing, but when trying to figure out what to do first, prioritize the tasks by order of importance as well as date they need to be accomplished. This is an easy way of narrowing down your task list and helping you complete the most essential tasks.

Task lists can be overwhelming, and they can even be counterproductive. However, if utilized correctly, they can be not the bane of your existence, but rather the core of your professional life. By being specific, limiting your list, following through with your tasks, giving yourself a close deadline, learning from your lists, and prioritizing, you can use your task lists to get it all done in style.