Top Posts
24 Things That Will Make You Laugh (Even...
How To Deal With Bitter People
Having Family Problems? Here’s How To Fix Them
20 Easy Ways to Protect the Environment and...
5 Surprising Benefits of Training Your Glutes
5 Reasons Warm Weather is Good For Your...
8 Ways To Have A Super Relaxing Weekend
The Importance Of Being Grateful
QUIZ: What Workout Are You?
7 Healing Foods That Boost Metabolism
You are Here: Inspiyr > GET MOTIVATED > How to Follow Your Dream Like a DareDevil

Bryan and Mike are just two of the daredevils featured in History Channel’s new show, American Daredevils, which premiered on October 22. The show follows several stuntmen who have collectively survived a countless number of stunts and have set numerous world records. 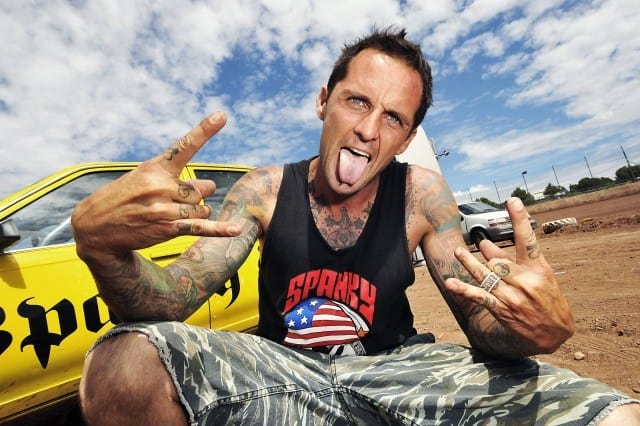 Inspiyr had the opportunity to interview Bryan and Mike about their experiences and their advice for anyone who would like to pursue this dangerously thrilling career path—or really, for anyone who is reaching for their dreams.

At what age did you know you wanted to become a daredevil?

Bryan: I’ve been chasing this dream since I was 14 years old. By the time I was 18, I was performing stunts for live audiences.

Mike: I think I was around 12 when I saw Evel Knievel jump for the first time. I went out and got a red, white, and blue bike and started making jumps with my best friend Brian and jumping over them.

Bryan: The stunts really don’t scare me. I’ve never been scared before a stunt—just really anxious. It’s the waiting game the few hours before a stunt that sucks.

Mike: A lot of what I do is “unknown.” Usually, it’s stuff that others have tried but not been successful, or have never been tried at all. So all of that is scary…but if I had to pick one, I would say it was the first time I ever did a car explosion inside the car and had to put all my trust in my ability to engineer a safe outcome (i.e. would the safety gear work, would the whole car explode, would they be able to put it out?).

What’s your “dream” stunt you haven’t done yet?

Bryan: My dream stunt is breaking the distance record in a truck and driving it off. It would be farther than a dirt bike, snowmobile, or anything that’s ever jumped before. 500 feet, ramp to ramp.

Mike: It’s a stunt that involves all three of us doing an epic car jump all in the air at the same time…I’m sure you will see it very soon. Then I will dream up the next one.

If you weren’t doing stunts, what would you be doing?

Bryan: I would be a scuba diver at an amusement park. Keep it simple.

Mike: I think I would be doing refrigeration which is another love of mine. Also, racing and wrecking cars, and working with kids in some form or another. I guess I would be doing whatever God’s plan is for me at the time.

You both have followed your passion and dreams, even through all the hard-knocks and tough times. What advice do you have for other people who want to go after their dreams?

Bryan: It doesn’t come easy. You can never give up chasing your dreams. There will be times you feel like you’re all alone with no support, bruised and battered. Just never give up. it’s hard work to make it to the top.

Mike: Never settle for less than you can dream, and always strive to be the best at whatever you do! Own your zone!

How do you define success?

Bryan: Getting paid for what you love to do. Being happy.

Mike: By the smiles on the kids’ faces in the crowd.

Related: Set Your Goals: The First Step to Success

What’s the hardest part of your job?

Bryan: Being on the road is the hardest part of the job, away from my smokin’ hotwife and my four little rugrats.

Mike: Time management and the ability to create and deliver the best shows in the business!

Looking back on your life many years from now, what would you want to be known for?

Bryan: Being one of the world’s greatest all-around stuntmen, and just having a good time while doing it.
Mike: First and foremost, as a man of God and a person who lived his dream and never took the word “no” to mean stop or quit!

What keeps you going every day, after all these years?

Bryan: I love the feeling when I’m gunning at that ramp the whole stunt it’s so unexplainable. I’m a Daredevil to the bone.

Mike: The love for what I do and the love for the people I do it for.

Related: How to Get Motivated from Within

Bryan: Never give up.

Catch American Daredevils on Tuesdays from 10 PM ET/PT on the History Channel.

5 Ways to Stay Healthy During the Holidays

The Worst Way to Get What You Want: Common Interests