Top Posts
24 Things That Will Make You Laugh (Even...
How To Deal With Bitter People
Having Family Problems? Here’s How To Fix Them
20 Easy Ways to Protect the Environment and...
5 Surprising Benefits of Training Your Glutes
5 Reasons Warm Weather is Good For Your...
8 Ways To Have A Super Relaxing Weekend
The Importance Of Being Grateful
QUIZ: What Workout Are You?
7 Healing Foods That Boost Metabolism
You are Here: Inspiyr > GET MOTIVATED > Why Your Struggles Can Help You Grow

Why Your Struggles Can Help You Grow 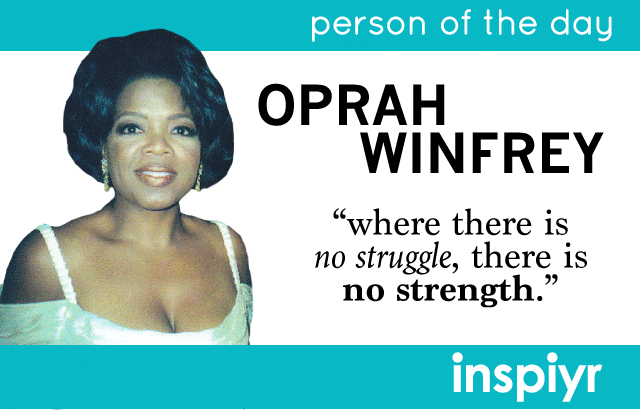 Oprah Winfrey is known for her inspiring talk show…as well as her vast amounts of money, which she has used to make countless lives of others better. She is so famous that she’s known simply by her first name: Oprah. However, though she’s a billionaire celebrity now, that wasn’t always her life. It’s difficult to picture her previous life: she was brought up on a farm in extreme poverty. Her tale is truly one of the rags-to-riches.

Poverty wasn’t Oprah’s only problem in her childhood. She was sexually abused by her cousin when she was young, then taken out for ice cream and told to keep it a secret. Later, she was abused two more times by two separate people–her family friend and her uncle. Oprah endured incredible trials and obstacles and not only overcame all odds to become the famous and successful person she is today, but actually used her struggles to help inspire others.

No matter how awful your struggles have been, you can use them to help others. There will always be someone else who is going through the same issues you are. Help lift them up and inspire them, like Oprah.

Motivational Words: 41 Quotes to Get You Pumped

The Art of Nothingness: How Doing Less Can Help You Live Life To Its Fullest