Top Posts
24 Things That Will Make You Laugh (Even...
How To Deal With Bitter People
Having Family Problems? Here’s How To Fix Them
20 Easy Ways to Protect the Environment and...
5 Surprising Benefits of Training Your Glutes
5 Reasons Warm Weather is Good For Your...
8 Ways To Have A Super Relaxing Weekend
The Importance Of Being Grateful
QUIZ: What Workout Are You?
7 Healing Foods That Boost Metabolism
You are Here: Inspiyr > GET HAPPY > 5 Things Men Hate About Women

Ok, not really. But I got your attention.

This story comes from a recent discussion with my husband.

On a (nearly) weekly basis, we have our typical man vs. woman rant, in which one of us backs out of the room, knowing we’ll never understand the opposite sex.

The most recent discussion caused me to pause, and instead of backing out of the room, I stuck around and asked questions.

While men have a reputation for never understanding women, our side of the story can be just as confusing. 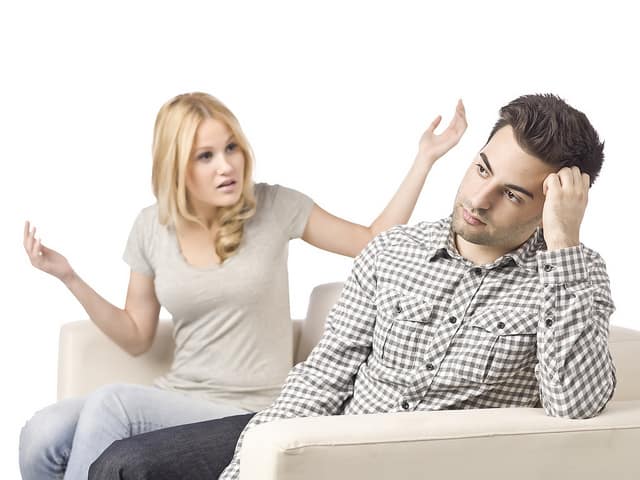 When we think of men, from a woman’s perspective, we think of the adoring creature who just doesn’t seem to have a lot on his mind, and who apparently needs sex constantly, according to what we read. That is simply not the case.

While it’s true that we’re each equipped with our own needs and desires, we’re also each given a brain. So what is it that we do that drives men crazy?

Welcome to a brief understanding, from a man’s point of view.

1. Complaining about your appearance.

The root of the discussion that caused this article to occur was a disagreement of this very topic. He complimented me. I scoffed. He got mad. That was it.

That’s all it took. I couldn’t just take a simple compliment, say thank you, throw my arms around him, and love him for loving me so much.

Instead, I grumbled at his comment, and caused him unneeded stress.

When I asked him from where the agitation stems, he said something along these lines: “Women can’t seem to get it in their heads that if we’re with you, it’s because we want to be. If you’re complaining your ass is too big, don’t project that onto us. Clearly we like it, or we wouldn’t be groping at it all the time!”

Seems simple, huh? That’s because it really is. I’ll be working on it too, but seriously girls, just take a compliment. Embrace your ability to overcome your scoffs. When you do, it’s actually quite a nice feeling.

Related: 6 Ways To Have More Body Confidence This Summer

2. Comparing him in any way.

Apparently I do this, and don’t even realize it, which made me concerned that if I’m doing it, surely others out there are doing the same thing.

Bottom line: just because you had an experience in the past with someone else, does not mean you will be forever indebted to that experience. You don’t owe it anything.

So the next time your man installs a ceiling fan, don’t try to “help” him by giving him advice based on what you saw your ex do. Even if you’re comparing him to your dad, it still makes him feel small.

Remember that feeling when he compared you to his mother? Yeah, hold onto that thought.

Related: 4 Reasons Why You Should Stop Trying To Change People

This is a big one. I’m incredibly guilty of it, and I know that working on it will be no easy feat.

According to my husband, the biggest frustration doesn’t come when he is doing something, and I offer up an opinion of how to fix his problem. He welcomes my opinion.

The problem lies with my inability to keep my mouth shut when I’m right. That’s right, we’ve all been there. Sometimes, “I told you so” is the most tempting—and satisfying—phrase to utter.

But don’t do it. Don’t even allude to it with your body language. Just allow him to fix the problem and move on.

When I asked him how I can help keep this problem at bay, he just said, “Let me fix it how I want to fix it. If you’re right, I’ll absolutely tell you. But if you tell me, I’ll never admit it, and I’ll be annoyed.” Sounds fair.

4. Assuming, in any fashion.

This one speaks to the mothers out there. However, if you’re not a mom, listen up, because this is still important.

Don’t assume that he’s not backing you up on parenting techniques. Chances are, he is, there is just additional communication required to make sure you’re on the same page.

So before you fly off the handle and assume he’s not backing you up on your decision to take the Wii away from the kids for 2 hours, he probably is: it just takes him time to process it.

For all of you out there, moms or not: the bottom line is this: don’t assume.

5. Not communicating what you’re upset about.

You walk into the house, already frustrated. He comes up behind you to smooch on you for a minute. You back away, and go into another room. He comes after you. He asks, “What?!” To which you respond, “You know what you did.”

According to the man in my life, they probably really don’t know.

Now, I realize that there may be some exceptions here, but it is very possible that most of the time, they don’t know what they’ve done. Obviously, it’s safe to assume that if you watched him break your grandmother’s vase, then walk away, then you confront him, and he denies it, you probably have a battle worth fighting.

Related: The 7 C’s Of Happy Relationships

However, if on Tuesday, he eats the cucumbers you were saving for lunch on Wednesday, by Thursday, he very likely has no idea why you’re mad in the first place.

If you’re upset, that’s okay. But explain it—because “you know what you did” will just make him angry and defensive right of the gate.

I am not a relationship counselor, and my marriage is far from perfect, but as I wrote out this list, I noticed the underlying factor in all of his “woman irks” is communication.

Men are often criticized for their emotional detachment and lack of communication, and yet, my experience is that they want us to communicate with them more. While still keeping it simple, the takeaway is the same: don’t assume, don’t sweat the small stuff, and stop saying your ass is huge. Whatever size it is, it’s yours, and he loves it (and you should, too).

Audra Dittlinger is a contributor for Inspiyr, as well as a full-time working mom living in rural Indiana. She is an insurance professional with a Bachelor of Arts in English. She writes to create, inspire, and empower.

The Scoop On Poop: 13 Things You Should Know About Your Bowel Movements