Top Posts
24 Things That Will Make You Laugh (Even...
How To Deal With Bitter People
Having Family Problems? Here’s How To Fix Them
20 Easy Ways to Protect the Environment and...
5 Surprising Benefits of Training Your Glutes
5 Reasons Warm Weather is Good For Your...
8 Ways To Have A Super Relaxing Weekend
The Importance Of Being Grateful
QUIZ: What Workout Are You?
7 Healing Foods That Boost Metabolism
You are Here: Inspiyr > GET MOTIVATED > Why Having Enemies is a Good Thing

Why Having Enemies is a Good Thing 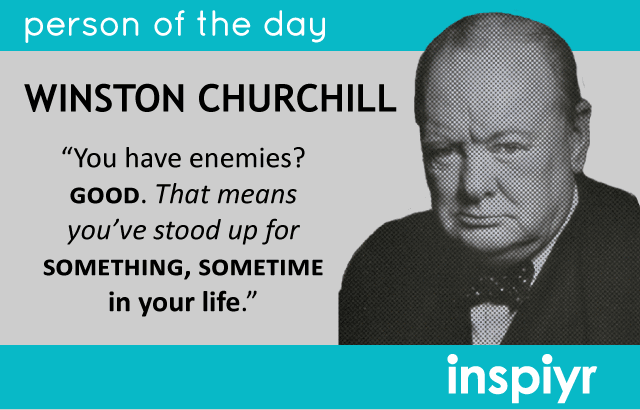 Winston Churchill: a former British Prime Minister that is well known for his spirit, courage, and wisdom. Everyone knows his name, and certainly not just in Britain. However, he only became the Prime Minister at age 62. What happened in his life before that?

Well, he wasn’t always a great speaker–in fact, he had a speech impediment in his early years. He did quite poorly in school. And after school, he failed in many political ventures and was defeated in every election for public office, only becoming the Prime Minister at 62. Before that, few even knew his name.

Even if you think it’s too late to accomplish your goals, it never is. Consider: if you’re twenty years old now, you still have 42 years on Winston Churchill before he completed his. If you’re forty years old, you still have 22. No time is too late, and there’s no excuse to stop going after your dreams, no matter how many failures you face or how much time it takes.

Intermittent Fasting for Fat Loss? Not So Fast…

7 Ways to Prevent a Cold