Top Posts
24 Things That Will Make You Laugh (Even...
How To Deal With Bitter People
Having Family Problems? Here’s How To Fix Them
20 Easy Ways to Protect the Environment and...
5 Surprising Benefits of Training Your Glutes
5 Reasons Warm Weather is Good For Your...
8 Ways To Have A Super Relaxing Weekend
The Importance Of Being Grateful
QUIZ: What Workout Are You?
7 Healing Foods That Boost Metabolism
You are Here: Inspiyr > GET MOTIVATED > Inspiyr’s Person of the Day: Albert Einstein 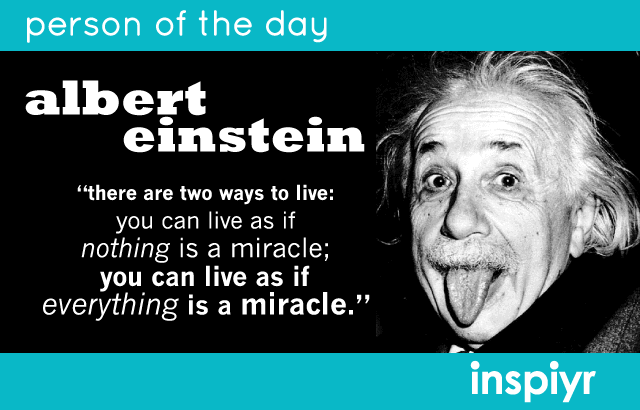 Can you imagine being so smart, so known in the field of science, that your name is commonly synonymous with incredible intelligence?

Einstein is known for his groundbreaking discoveries in the field of science, and his name will go down in history for all of mankind.

But Einstein was not always considered so smart. In fact, he barely spoke until the age of nine, and he was thought to have speech and possibly developmental issues. Coupled with the fact that Einstein could barely pass any subjects other than math and science and constantly struggled in grade school, he was thought to be rather dull. It goes without saying that he certainly proved his nay-sayers wrong.

Are there people who don’t believe in you? Who constantly judge your abilities and try to keep you down where they think you belong? Don’t believe them. Go against them. Go to the beat of your own drum–not society’s. If you have a passion, pursue it actively, no matter what anyone says.

Who knows: you may be your field’s next Einstein.

The Top 19 Best Foods for Athletes

5 Ways to Use Color Psychology to Improve your Life