Top Posts
24 Things That Will Make You Laugh (Even...
How To Deal With Bitter People
Having Family Problems? Here’s How To Fix Them
20 Easy Ways to Protect the Environment and...
5 Surprising Benefits of Training Your Glutes
5 Reasons Warm Weather is Good For Your...
8 Ways To Have A Super Relaxing Weekend
The Importance Of Being Grateful
QUIZ: What Workout Are You?
7 Healing Foods That Boost Metabolism
You are Here: Inspiyr > GET HEALTHY > The Dangers Of Gluten And Why You Need To Stop Eating It

Do you know someone who has gone gluten-free?

Odds are, you do. Gluten-free living is all the rage, but few know exactly what gluten is and how it impacts our bodies.

Let’s clear up the confusion here – it’s quite simple, actually. After years of research and observing thousands of patients feel better off gluten, not to mention myself, I am happy to shed light on the mystery of gluten, and explain the dangers of gluten, as well as how it can cause stress in your body. 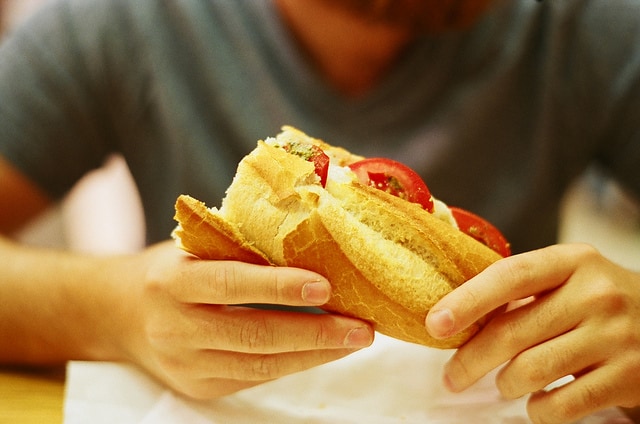 Gluten is the protein aspect of certain grains, including wheat, barley, rye and spelt.

Related: Is Wheat Bad For You? 7 Alarming Reasons Why

When you eat these grains, or foods containing them, you are eating gluten.

The most common foods containing gluten are bread, pasta, pizza crust, bagels, cookies, and pastries. So you can see, it is quite easy to be exposed to gluten everyday and even every meal.

Where is Gluten Hiding?

In addition to the common places we find gluten, it can also be found hidden in many other foods because it helps to thicken liquids and allows things to stick together. It can also create a chewy and/or fluffy texture.

This is why it is used in soups (even miso soup), gravy, dressings, sauces, pastries, cookies, cakes, soufflés, pasta, cereals, and breads.

Related: 7 Food Labeling Gimmicks, Tricks, And Lies To Watch Out For

Gluten also hides in products you wouldn’t think of based on their chewiness. Soy sauce, for example, contains gluten – so be sure to choose the gluten-free alternative called tamari sauce (it says gluten-free on the label).

Sometimes, other condiments, like mustard, ketchup, and BBQ sauce, may also contain gluten.

Then there are flavored chips and crackers. Even corn chips, if they are spicy or flavored in any way, may well include flour and/or wheat in their ingredients lists.

The same goes for anything seasoned such as spice mixes (taco mix, for example) or anything containing modified food starch (even chewing gum).

Why is Gluten Unhealthy?

The simple truth is that humans cannot digest gluten. We can consume foods that we can’t digest – we also cannot digest fiber and beans, for example. In small quantities, it is usually not an issue.

The dangers of gluten come into play when we consume large amounts of it (at every meal, for example) and especially if we have a genetic tendency to react to gluten.

Here’s what happens: undigested proteins from gluten (also known as gliadin) get noticed by the immune system in our gut, triggering an inflammatory response that can spread throughout the body.

What are the Negative Health Consequences of Gluten?

Gluten then causes leaky gut, an immune system/digestive issue in which the cells lining the intestines, and the space between them, is damaged, allowing food to leak through (gluten and as well as other food) and to trigger inflammatory responses while decreasing absorption of nutrients.

Leaky gut has been associated with such chronic health issues as obesity, diabetes, heart disease, liver disease, neurological issues (like Parkinson’s and Alzheimer’s), and cancer.

Then, there’s celiac disease, which is an autoimmune disease in which further damage to the intestines due to immune responses to gluten can cause severe and life threatening health issues.

It is estimated that 1 in 133 people have developed celiac disease already – that’s over 2 million people in the U.S – and most of them have no idea.

Even if you don’t have celiac disease, it is thought that at least 1 in 4 people develop what is now known as non-celiac gluten sensitivity (NCGS).

NCGS is associated with a number of health issues varying from fatigue and bloating to migraines and PMS. The effective treatment for both celiac disease and NCGS is the avoidance of gluten.

How Does Gluten Cause Stress on the Body?

The dangers of gluten don’t stop there. Once the immune system in the intestines starts reacting to gluten, it is exponentially more likely that the immune system will start reacting to other foods – most often dairy proteins (casein and whey), eggs, potato, soy, and other grains (rice, millet, and corn).

Related: Boost Your Immune System With These 4 Foods

At this point, a person is often hit by digestive symptoms, no matter what they eat, and potentially also experiences fatigue, sleep issues, mood changes, skin rashes, frequent infections, thyroid issues, and in some cases, autoimmunity.

As mentioned before, 1 in 4 people have a gluten intolerance—so it’s quite possible, if not likely, that you have one.

Related: Benefits And Risks Of A Gluten-Free Diet

Currently research indicates that the best way to determine whether you have gluten sensitivity is to remove gluten from your diet for at least three weeks (however, in some cases, it could require six months of elimination) and then reintroduce gluten to determine whether symptoms occur or return.

Another option is to test for IgG antibodies to gluten, which can be done with as little as a finger prick, although most practitioners are not offering this panel or may not be familiar with the relevance of the results. Feel free to contact my office for assistance.

Conclusion: Are Gluten-Free Diets a Fad?

The dangers of gluten are real. While many people question whether avoiding gluten is a fad, I would say that it is actually a much-overdue awareness for the trouble that gluten causes for our bodies. The exposure to gluten in the human diet, and more specifically, the American diet, has increased in the past 50 years.

It is only recently that research and practitioners have realized the number of cases that could benefit from the avoidance of gluten in the diet. Previously, it could take decades for patients to find out that gluten was an underlying cause of their distress. It may be for you…try it out and see for yourself.

, a nationally celebrated naturopathic doctor, teaches women, men, and children how to make life-changing differences to improve their health using natural approaches. In her new book, “The Stress Remedy,” she discusses how and why we experience stress and its impact on health and wellbeing, in addition to providing expert guidance on how to reduce stress and reclaim optimal health.

3 Ways You Can Achieve Success by Surrendering

5 Ways You Can Achieve Balance In Life