Top Posts
24 Things That Will Make You Laugh (Even...
How To Deal With Bitter People
Having Family Problems? Here’s How To Fix Them
20 Easy Ways to Protect the Environment and...
5 Surprising Benefits of Training Your Glutes
5 Reasons Warm Weather is Good For Your...
8 Ways To Have A Super Relaxing Weekend
The Importance Of Being Grateful
QUIZ: What Workout Are You?
7 Healing Foods That Boost Metabolism
You are Here: Inspiyr > INTERESTING > Delaying Fatherhood May Have Benefits for your Kids

Delaying Fatherhood May Have Benefits for your Kids

Research seems to show that delaying fatherhood will offer advantages for offspring. Children of older fathers may be genetically programmed to live longer.

Scientists found that children born to fathers between the ages of late 30s to early 50s inherit longer ‘telomeres’ or tiny protective caps on the ends of chromosomes that protect against aging degeneration and disease.” 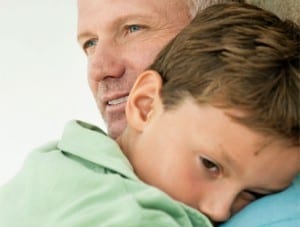 So how does it work? Why do children of older fathers live longer? It has been known for quite some time that lifespan is linked to the length of telomeres. Telomeres are structures that sit at the end of the chromosomes and house our DNA. Generally, a shorter telomere length means a shorter life expectancy. Professor Christopher Kuzawa, an anthropologist at Northwestern University, said:

While most telomeres shorten with time, they lengthen in sperm, maybe because of the enzyme that extends telomere length, telomerase, is high in testes.”

Since telomere length increases with age in sperm, and men pass on their DNA to their children via sperm, offspring of older fathers inherit longer telomeres. In addition, research shows that telomere lengthening was even greater if the child’s paternal grandfather had also been older when he became a father.

Inheriting longer telomeres will be particularly beneficial for tissues and biological functions that involve rapid cell growth and turnover – such as the immune system, gut and skin – the scientists believe.”

There is still a lot of research that must be done in the area of telomere lengthening, but at this point is seems children with older fathers may have an advantage.

Want To Start a Business? Check Out These 5 Tips From a Lawyer, First