Top Posts
24 Things That Will Make You Laugh (Even...
How To Deal With Bitter People
Having Family Problems? Here’s How To Fix Them
20 Easy Ways to Protect the Environment and...
5 Surprising Benefits of Training Your Glutes
5 Reasons Warm Weather is Good For Your...
8 Ways To Have A Super Relaxing Weekend
The Importance Of Being Grateful
QUIZ: What Workout Are You?
7 Healing Foods That Boost Metabolism
You are Here: Inspiyr > GET MOTIVATED > Turning Failure into Success 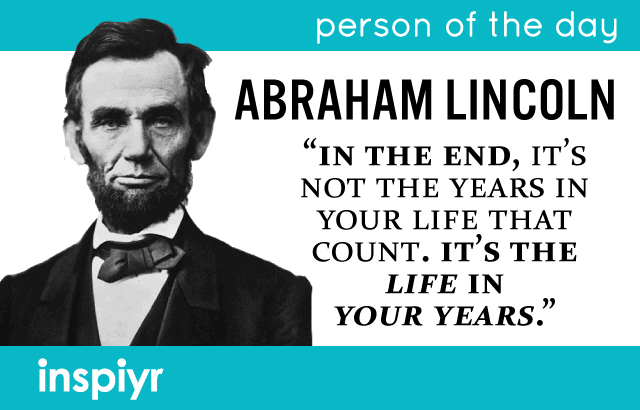 Abraham Lincoln: a man that everyone can recognize, that we see every day on our five-dollar bills. A man of greatness, despite his life being cut so short. However, though he was, indeed, an incredibly successful person, politician, and president, Lincoln did not go without his share of trials and tribulations.

Lincoln had not one, but two failed business ventures. The presidential election he won was not his first; he lost five separate elections before he was finally sworn in. Lincoln also faced his share of heartache when his fiance and his love passed away before they could get married.

When you face failure or grief, how do you cope with it? It can seem impossible to overcome at the time. When you go after your dream, but you fail, it can seem scary and even insane to try once again. However, it is imperative that you get back up and face your fear. Even if it takes you six tries, like it did Lincoln, you can do it. And who knows–years from now, you might be the next face on the country’s currency.

Most Inspirational Presidents in American History

5 Tips to Ordering the Healthiest Food at McDonald’s