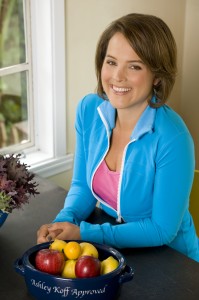 Ashley Koff is an internationally-renowned registered dietitian on a mission to improve the health of people across America and beyond through raising public awareness of the value of quality eating. A self-described “Qualitarian,” Koff advocates eating the better quality foods available—choosing whole foods over processed parts, natural over made in a chemistry lab and organic whenever possible to avoid hormones, synthetic fertilizers, GMOs and harmful pesticides—to optimally fuel the body. She created the Ashley Koff Approved (AKA) list as a tool to help healthcare practitioners and health-interested consumers choose groceries, dietary supplements, and prepared food options of better quality. Her selections are based on rigorous standards of nutrition, sourcing methods, and marketing integrity, backed by extensive research and globe-spanning travels to get the whole food story.

Widely sought for her knowledge and ability to translate nutrition science into practical and motivating messages, Koff regularly appears on national television programs, including The Dr. Oz Show, The Doctors, and national and local news programs. She is also frequently featured in and writes articles for national publications, including The New York Times, O!: The Oprah Magazine, Every Day with Rachael Ray, Redbook, and Women’s Health. She created and was the lead expert for Huffington Post Living’s “Total Energy Makeover with Ashley Koff RD” which aired monthly on Good Morning America Health, and is the featured dietitian for Deepak Chopra’s new YouTube Channel show, 30 Days of Intent. She was the featured dietitian on both the CW’s Shedding for the Wedding and Lifetime’s Love Handles. Off camera, she has been a nutrition consultant for over 10 years, seeing patients referred by some of the country’s leading doctors—Dr. Andrew Weil, Dr. Woodson Merrell, and Dr. Soram Khalsa, among others. Based on the need expressed by many of her entertainment industry clients, Koff started and continues to manage her AKA Craft Services makeover project for popular shows like ABC’s Private Practice, CBS’ CSI: New York, HBO’s Big Love, FOX’s Bones, and FX’s It’s Always Sunny in Philadelphia, as well several major movies. In addition, she is currently a contributing editor for Natural Health Magazine, on the advisory board of Fitness Magazine, and a spokesperson for several national brands, and writes for several blogs including The Huffington Post.

Recently recognized by natural foods industry leader New Hope 360 as one of the leading “50 Natural Influencers” in health and nutrition to follow on Twitter, Ashley Koff has also been named among the Top 10 Registered Dietitians in the US by Today’s Dietitian Magazine and the Best of LA’s “Nutritionist/Dietitians” by CitySearch, three years running. A respected industry advisor, speaking at conferences like Natural Products Expos East and West, she is also a leadership team member of the Natural Resource Defense Council, one of the nation’s most effective environmental action groups, and an avid supporter of First Lady Michelle Obama’s “Let’s Move” campaign.

Ashley Koff is the author of Mom Energy: A Simple Plan to Live Fully Charged (Hay House; 2011) as well as Recipes for IBS (Fair Winds Press; 2007) and contributed chapters to several medical textbooks. She maintains a private practice, with celebrities such as Molly Sims, Emily Deschanel, Amy Breneman, Andy Richter, KaDee Strickland, and Elizabeth Hasselbeck among her clients. She also serves on the faculty of the Continuum Center for Health and Healing at the Beth Israel Medical Center in New York City. Koff was educated at both Duke and New York Universities and trained at LA+USC and Columbus Children’s hospitals. She completed coursework for Certified Clinical Nutritionist (CCN) and continues her education with online integrative medicine modules and conferences.