Top Posts
24 Things That Will Make You Laugh (Even...
How To Deal With Bitter People
Having Family Problems? Here’s How To Fix Them
20 Easy Ways to Protect the Environment and...
5 Surprising Benefits of Training Your Glutes
5 Reasons Warm Weather is Good For Your...
8 Ways To Have A Super Relaxing Weekend
The Importance Of Being Grateful
QUIZ: What Workout Are You?
7 Healing Foods That Boost Metabolism
You are Here: Inspiyr > GET MOTIVATED > Why You Should Never Quit on Your Dreams

Why You Should Never Quit on Your Dreams 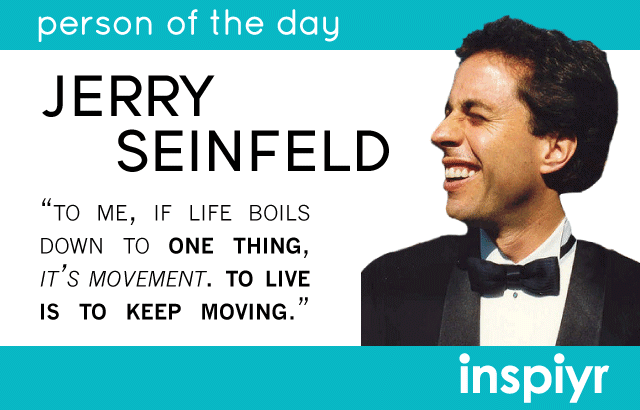 Everyone’s heard of Seinfeld, one of the most popular sitcoms of all time. “No soup for you!”

Seinfeld, as well as Jerry Seinfeld himself, are both beloved parts of today’s popular culture. Jerry Seinfeld is known for his hilarious stand-up. However, Seinfeld’s career wasn’t all laughs.

Seinfeld had to work incredibly hard to get where he is today. His story is a tale of rags to riches, as he was a single guy living alone and working many hours as a waiter at Brew and Burger so he could support his dream of being a comedian.

Even when he got his start, he was constantly heckled or just downright ignored by audiences. In fact, during one of his early acts in New York, performers danced right through his act as if he wasn’t there. However, he kept on pushing towards his dream, and now he’s one of the most well-known comedians out there.

Whenever you are feeling tempted to give up, remember that Seinfeld once was laughed at…and now the whole world is laughing with him.

5 Tips for Getting Your Dream Job

5 Surprising Benefits of Training Your Glutes