Top Posts
24 Things That Will Make You Laugh (Even...
How To Deal With Bitter People
Having Family Problems? Here’s How To Fix Them
20 Easy Ways to Protect the Environment and...
5 Surprising Benefits of Training Your Glutes
5 Reasons Warm Weather is Good For Your...
8 Ways To Have A Super Relaxing Weekend
The Importance Of Being Grateful
QUIZ: What Workout Are You?
7 Healing Foods That Boost Metabolism
You are Here: Inspiyr > GET HAPPY > 7 Questions and Tips for Building Relationships

7 Questions and Tips for Building Relationships

Most of us know how important relationships are to health, happiness, and success. That’s why we invest so much energy into creating, sustaining, and mending them. But until I was thirty years old, I didn’t realize that there is a specific type of conversation for building relationships, and that some questions work much better in this conversation than others. 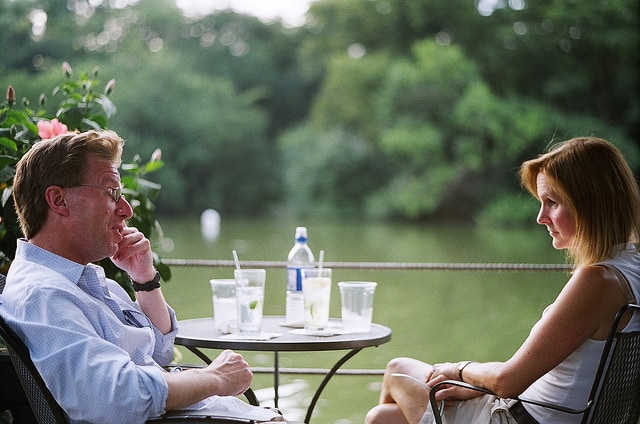 Conversation: The Most Essential Part of Building Relationships

My awakening to the concept of “conversation for building relationships” happened in the lobby of a hotel in San Francisco’s Union Square. Kathy, a senior manager at Hewlett Packard, was coaching me on how to get a girlfriend.

Related: 7 Ways to Have Lasting Relationships

I had just moved across the country from Michigan and was trying to make a few life changes. One was to find someone special. Kathy and I sat across a small round table, and I told her the tale of my dating life: what I was looking for, how I approached things, who I had been dating, and how things tended to turn out.

The full story, which I had never told anyone before, took two hours. Kathy listened attentively the entire time. When I was finished, she gently asked, “So, Amiel, I can see how important a healthy partnership is to you, as well as all the effort you’ve put into dating. What do you think is getting in the way?”

In all my years of being single, I had never seriously explored this question. “Um…I really don’t know,” I replied.

“Let me give you my take,” Kathy said, pulling out a pad of paper and pen. She drew a picture of three concentric circles—labeled, from the inside out, Relationship, Possibility, and Action.

“There are three types of conversations,” she said. “Each one has a purpose and is important in dating and the rest of life. A conversation for relationship is about exploring interests and finding out what the other person likes and doesn’t like, so you have a sense of whether this is someone you’d want to spend more time with.

“I think,” Kathy replied, “you’re jumping too quickly into conversations for action and skipping over the other two types of conversation. As a result, you’re asking women out before you’ve gotten to know each other. Even when you think you’re going deep by having them tell you their life story, you’re actually not getting a sense of what they like to do or what’s important to them today. You’re skipping the conversation for relationship.”

Related: The Science Behind a Happy Relationship

Although I hated to admit it, she had a point. Once I found a woman attractive, I tended to either draw her into an extended discussion of her past or plunge right in and ask her out. If I invited her for a date, one of two things happened: she said “no,” and I felt disappointed, or she said “yes,” and I ended up spending time with someone who was pretty, but not particularly interesting to be with.

No wonder I was finding it so difficult to get into a sustained partnership!

Walking out of the hotel that day, I made a commitment to myself to become more conscious of the type of conversation I was in—not just while dating, but throughout life.

Related: How to Argue in a Relationship

Up until now, I had not viewed conversations as the most essential part of building relationships. This was a new world for me. So I stumbled, bumbled, and generally mumbled my way through.

Fortunately, instant excellence was not my goal. Learning was. And once it became clear that skillful conversations were crucial to my professional success, friendships, and overall happiness, it made sense to practice them—a lot.

Practicing conversations for building relationships meant speaking differently. It was time to break out of my old habit of asking all the questions. It was time to take the risk of revealing myself. Professionally, this meant sharing with clients and colleagues what kinds of projects and people I most enjoyed.

Personally, this meant telling both women I dated and potential new friends that I liked to read books, talk politics, watch old movies from the pre-code era, and spend hours exploring the city on foot. Such self-disclosure drew people with similar interests to me and helped them see me as a sincere and open person.

Related: How to Communicate Effectively

It also meant listening differently. In the past, while listening, my mind tended to race far into the future. In the first meeting with a potential consulting client, I’d quickly begin imagining what would happen two or three years down the road—typically either a raging success or a disaster. On a first date, I’d wonder whether this was someone I could marry. In both cases, the farther into the future my attention ran, the less present I was to the person in front of me and what they were revealing about themselves.

Getting out of this habit meant building a new habit of listening for the other person’s interests, immediate concerns, likes, and dislikes. What did the potential client want to get out of a consulting relationship? What were they looking for in a consultant? How did my date like to spend weekends? What people and things in life were important to her? The answers to these questions, I learned, didn’t just magically appear. You had to listen for them.

And, it turned out, you had to ask for them.

This led to the third and most important step in improving conversations for building relationships: expanding my repertoire of questions. The old bag of tricks would no longer suffice, because it failed to elicit others’ interests, immediate concerns, likes, and dislikes. Accomplishing this called for a new set of questions. I didn’t have a manual to guide me, so I learned the old-fashioned way: by trying things out and seeing what worked.

This took not months, but years. In 2005, when my then-fiancée and I moved north to Portland, we had many conversations about where we would live and the type of house we would buy. When a parent or sibling proposed a vacation, I would try to steer discussion toward what mattered to people before we made a decision.

When I took a sabbatical from my business for two years to head up performance improvement for a county agency, I asked these questions in the job interview and during the initial get-to-know-you chats with my new colleagues.

Over time, a pattern emerged. I call it the Seven Questions for Building Relationships. It is actually seven categories of questions that are relevant in all domains of life—work, friendship, dating, partnering, parenting, and volunteering—and at every stage in a relationship. As you’ll see, conversations for building relationships can be most valuable when held with the people closest to you.

The Seven Questions and Tips for Building Relationships

2. Opening questions about a particular topic or interest

Related: The Worst Way to Get What You Want: Common Interests

3. Questions about past likes and dislikes

Related: 5 Steps to Find Your Values in Life (And Why You Need to Follow Them)

These questions are not for one-time use. They are meant to be practiced over and over again until you feel comfortable with them—indeed, until you make them your own.

Change the words. Change the sequence. Experiment with asking them to different people and at different times. If at first, a phrase or question feels awkward to you, that is understandable. You are a beginner at it, so it should feel awkward.

Asking such a question is an expression not of who you are today, but of who you aim to become tomorrow. Stick with it and be patient with yourself. You may discover that conversations for relationship enhance your health, happiness, and success in ways that surprise you.

Amiel Handelsman is a Portland-based executive coach and change consultant with two decades of experience developing leaders. He is the author of Practice Greatness: Escape Small Thinking, Listen Like A Master, And Lead With Your Best (JZ Leadership Press, 2014).

Featured photo by All Kinds of New

Motivational Words: 41 Quotes to Get You Pumped