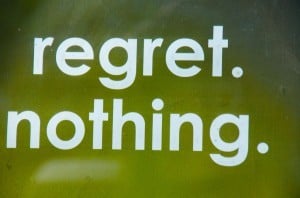 All of us have a few things we regret in life, either opportunities we didn’t take or screw-ups we’ve made.

Is it bad to have regrets?

Yes. No one can change the past. Having regrets can cause emotional and psychological harm by replaying the past instead of living in the present.

Why you should have no regrets?

What makes these experiences valuable is what can be learned from each, because that is the stuff that builds character and makes us better people.  But most of us aren’t as good at letting go of the past as we’d like.  And holding onto the past can cause a lifetime of pain.  So what can you do about it?  Live a life with no regrets.  Sure, it’s easier said than done, but the alternative is almost unbearable.

Can you live a life without regrets?

Researchers in Germany analyzed the effect regret had on emotional health, and the findings were powerful.

“Regret is a powerful mental energy which can be your best friend or worst enemy. You can harness it to improve your future by learning from it, but if you let it grow inside you, it is destructive to both healthy aging and emotional resilience,” said Dr. Murali Doraiswamy, a professor and head of the division of biological psychiatry at Duke University School of Medicine.  He was not involved in the research.

What are the biggest regrets people have in life?

The NY Times reported that missed romantic opportunities were the most common regret for women, while men most often had regrets concerning education, their career, or money.  But what was worse, regretting doing something that didn’t turn out as well as hoped, or missing an opportunity entirely?  It seems that not taking chances in life caused bigger emotional voids in the long-term.

What is the number one regret in life?

Looking at regret from a different angle, Bronnie Ware worked closely with people to ease their suffering during the last days of their life, and learned a lot of lessons about how to live with no regrets. Her patients were at the end of the line and shared their deepest regrets with her.

For many years I worked in palliative care. My patients were those who had gone home to die. Some incredibly special times were shared. I was with them for the last three to twelve weeks of their lives.

People grow a lot when they are faced with their own mortality. I learnt never to underestimate someone’s capacity for growth. Some changes were phenomenal. Each experienced a variety of emotions, as expected, denial, fear, anger, remorse, more denial and eventually acceptance. Every single patient found their peace before they departed though, every one of them.

When questioned about any regrets they had or anything they would do differently, common themes surfaced again and again.

“Live with no excuses and travel with no regrets” ~ Oscar Wilde.

Learn other ways to live a life without regret here.