Top Posts
24 Things That Will Make You Laugh (Even...
How To Deal With Bitter People
Having Family Problems? Here’s How To Fix Them
20 Easy Ways to Protect the Environment and...
5 Surprising Benefits of Training Your Glutes
5 Reasons Warm Weather is Good For Your...
8 Ways To Have A Super Relaxing Weekend
The Importance Of Being Grateful
QUIZ: What Workout Are You?
7 Healing Foods That Boost Metabolism
You are Here: Inspiyr > GET MOTIVATED > Never Give Up 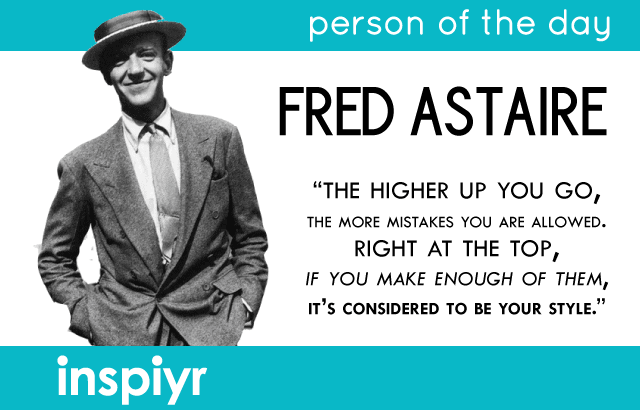 Fred Astaire: stage dancer, singer, choreographer, musician, and actor on Broadway and in films. Astaire is well known and perhaps one of the best dancers of all time. However, Astaire wasn’t instantly a success. In fact, during his first screen test, the judges claimed, “Can’t act. Can’t sing. Slightly bald. Can dance a little.” Those judges undoubtedly felt ridiculous when Astaire went on to be internationally acclaimed in not only dancing, but music, acting, and singing.

Even if you’re rejected initially, don’t give up on your dreams. The judges rejected Astaire because they didn’t understand his style–and he went on to be the most famous dancer of all time. Just because someone is higher up doesn’t mean they know all–and perhaps they just don’t get your style. Keep on reaching for the stars.

don't give upfeaturedfred astaireinspirationalperson of the day
0
FacebookTwitterPinterestRedditEmail
previous post