Top Posts
24 Things That Will Make You Laugh (Even...
How To Deal With Bitter People
Having Family Problems? Here’s How To Fix Them
20 Easy Ways to Protect the Environment and...
5 Surprising Benefits of Training Your Glutes
5 Reasons Warm Weather is Good For Your...
8 Ways To Have A Super Relaxing Weekend
The Importance Of Being Grateful
QUIZ: What Workout Are You?
7 Healing Foods That Boost Metabolism
You are Here: Inspiyr > GET MOTIVATED > Let Your Passion Be Your Guide

Let Your Passion Be Your Guide 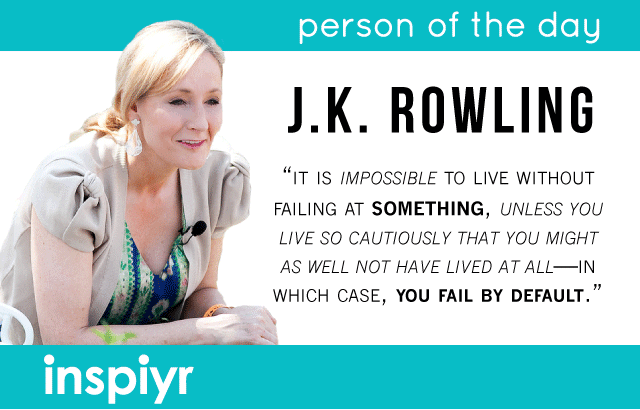 J.K. Rowling: creator of the beloved Harry Potter series that lines everyone’s book shelves, as well as an inspiration to writers everywhere. However, before the wonderful tales of witchcraft and wizardry at Hogwarts was penned, Rowling didn’t have such a blessed life. Hers is truly a tale of rags to riches.

Her mother passed away when she was quite young, and she has a strained relationship with her father, whom she hasn’t spoken to for years. She married young, but after her marriage dissolved and she became a single mother, she fell into a deep depression that almost led her to suicide.

She woke up constantly expecting her daughter to be dead, and she was so poor that she and her daughter were almost homeless. However, she penned the beginnings of Harry Potter and the Sorcerer’s Stone because she had an overwhelming desire to write. The rest is history.

No matter how low you’re feeling, how much you’re going through, or how unsuccessful you feel, you can always reach for your goal. Your passion can pull you out of your slump, and your dedication can keep you out so that you can live a happy and successful life…almost like magic!

5 Minutes to Get More Excited About Life