Top Posts
24 Things That Will Make You Laugh (Even...
How To Deal With Bitter People
Having Family Problems? Here’s How To Fix Them
20 Easy Ways to Protect the Environment and...
5 Surprising Benefits of Training Your Glutes
5 Reasons Warm Weather is Good For Your...
8 Ways To Have A Super Relaxing Weekend
The Importance Of Being Grateful
QUIZ: What Workout Are You?
7 Healing Foods That Boost Metabolism
You are Here: Inspiyr > GET MOTIVATED > This Best-Selling Author Was Once a No-Name Writer

This Best-Selling Author Was Once a No-Name Writer 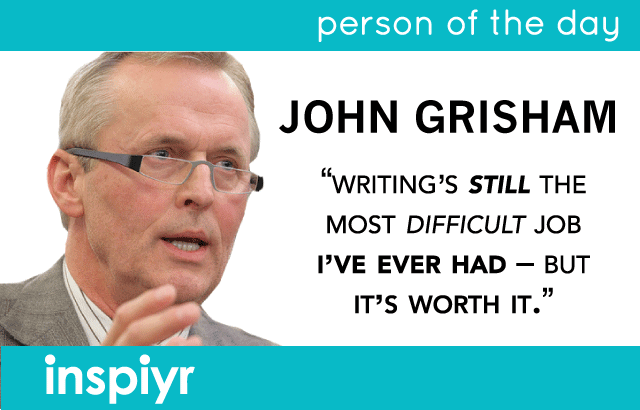 If you’re a book lover, you undoubtedly have a few of John Grisham’s masterpieces lining your shelves. His fame and success was clearly due to his natural-born talent as a writer. But did you know that Grisham didn’t always want to be a writer? In fact, his dream was to become a baseball player–a dream that he decided to give up.

He did achieve his second dream of being a writer, but not with ease. For years–three, to be exact–Grisham got himself out of bed at the crack of dawn to write before he went to work (after all, before you hit it big, you need to pay the bills!). It took him ages to sell his first manuscript, A Time to Kill, and even then the press published only 5,000 copies, most of which Grisham bought himself. Now, he’s an internationally-known writer, known for his amazing stories.

Achieving your dreams takes hard work. Don’t give up if it doesn’t work out for you the first time. Just keep on keepin’ on!

4 Reasons Why You Should Stop Trying To Change People