Top Posts
24 Things That Will Make You Laugh (Even...
How To Deal With Bitter People
Having Family Problems? Here’s How To Fix Them
20 Easy Ways to Protect the Environment and...
5 Surprising Benefits of Training Your Glutes
5 Reasons Warm Weather is Good For Your...
8 Ways To Have A Super Relaxing Weekend
The Importance Of Being Grateful
QUIZ: What Workout Are You?
7 Healing Foods That Boost Metabolism
You are Here: Inspiyr > GET MOTIVATED > Why You’re Not a Victim of Fate

Why You’re Not a Victim of Fate 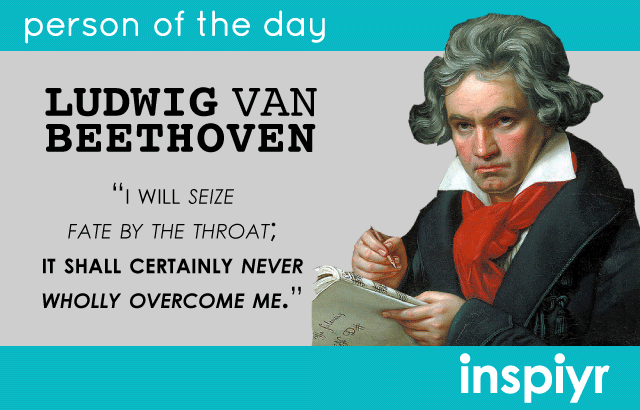 Ludwig van Beethoven is one of the most famous composers of all time. Along with Bach and Mozart, one automatically thinks of Beethoven when they think of classical music.

But Beethoven had to overcome many obstacles in order to reach his level of fame and success. His music teacher once said of him, “As a composer, he is hopeless.”

Even though Beethoven overcame his teacher’s negativity and became an incredibly famous composer, the saddest thing that can possibly happen to a composer happened to Beethoven: he lost his ability to hear. Though this initially plunged him into a deep depression, his love for music kept him composing.

In fact, when he conducted his Ninth Symphony, the audience loved it so much that they went wild with applause. The musicians had to turn him around so that he could see it, since he could not hear it.

If you love something enough, nothing has to stand in your way. Even if you lose what you think is the prime tool needed to chase your dreams–such as Beethoven’s ability to hear–remember that the true tool needed is dedication and passion. If a deaf man can be one of the most well-known composers of all time, you can do anything you set your mind to.

Four of the World’s Healthiest Foods