Top Posts
24 Things That Will Make You Laugh (Even...
How To Deal With Bitter People
Having Family Problems? Here’s How To Fix Them
20 Easy Ways to Protect the Environment and...
5 Surprising Benefits of Training Your Glutes
5 Reasons Warm Weather is Good For Your...
8 Ways To Have A Super Relaxing Weekend
The Importance Of Being Grateful
QUIZ: What Workout Are You?
7 Healing Foods That Boost Metabolism
You are Here: Inspiyr > GET MOTIVATED > A Day Without Laughter is a Day Wasted

A Day Without Laughter is a Day Wasted 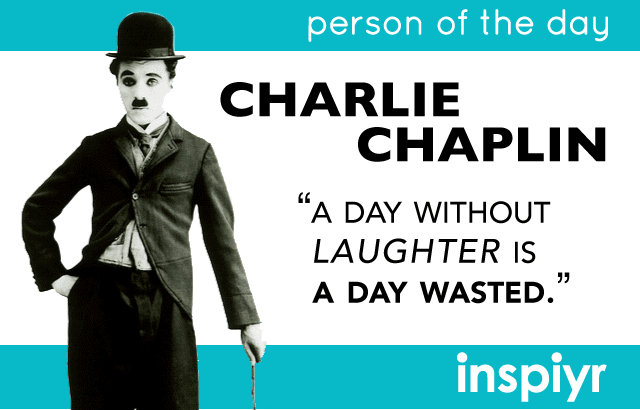 Charlie Chaplin is incredibly famous for many things: acting, filmmaking, and composing, all within the silent film industry. And his stuff was funny. However, his life wasn’t always full of laughs.

Chaplin was thrown on his own resources before he reached the age of ten, as the early death of his father and the subsequent illness of his mother made it necessary for Chaplin and his brother to fend for themselves. In fact, the two brothers even had to live in London’s tough workhouses for a period of time.

Though Chaplin gained incredible fame and success, during the Cold War, he was suspected of being a communist. His imprints were removed from the Hollywood Walk of Fame and have been lost since, and he was driven to Switzerland and only visited the U.S. once after his death.

However, his name goes down in history as a man who has made major breakthroughs that will forever influence movies and television.

So even if you’ve had a tough childhood, there’s hope. You can reach for the stars and follow your dreams, and even have a great sense of humor along the way.

What is a “Heart Healthy Diet”?