Top Posts
24 Things That Will Make You Laugh (Even...
How To Deal With Bitter People
Having Family Problems? Here’s How To Fix Them
20 Easy Ways to Protect the Environment and...
5 Surprising Benefits of Training Your Glutes
5 Reasons Warm Weather is Good For Your...
8 Ways To Have A Super Relaxing Weekend
The Importance Of Being Grateful
QUIZ: What Workout Are You?
7 Healing Foods That Boost Metabolism
You are Here: Inspiyr > GET MOTIVATED > Why You Should Be Nice to Nerds

Why You Should Be Nice to Nerds 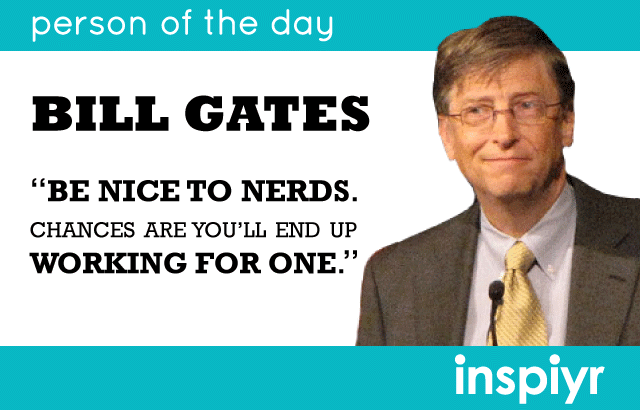 Bill Gates: known for his company, Microsoft, for sure…but probably better known as the richest man in the world at a net worth of approximately $72 billion. Give us some of that money, eh?

No, he shouldn’t, because Bill Gates is also perhaps one of the most generous men in the world. It’s not clear just how much he’s donated, but to his own charity foundation alone, he’s donated $28 billion! What an amazing guy!

However, all of this success did not come without hard work and challenges. Gates became interested in computers quite young, in the 7th grade. He developed his passion for computer science. His parents, however, had other plans. They wanted him to go to law school. They weren’t exactly happy when he said he wanted to drop out of college so he could start his own company, and it took him almost a year.

Just because someone else has your best interests at heart doesn’t mean you should listen to their advice. If you have your heart set on your goal, go for it. You can do it, and don’t be discouraged if not everyone supports your decision. After all, think about how lucky Gates’s parents were when he didn’t listen to their advice…

6 Tips for Reaching the Height of Your Physical Well Being