Top Posts
24 Things That Will Make You Laugh (Even...
How To Deal With Bitter People
Having Family Problems? Here’s How To Fix Them
20 Easy Ways to Protect the Environment and...
5 Surprising Benefits of Training Your Glutes
5 Reasons Warm Weather is Good For Your...
8 Ways To Have A Super Relaxing Weekend
The Importance Of Being Grateful
QUIZ: What Workout Are You?
7 Healing Foods That Boost Metabolism
You are Here: Inspiyr > GET MOTIVATED > If At First You Don’t Succeed…

If At First You Don’t Succeed… 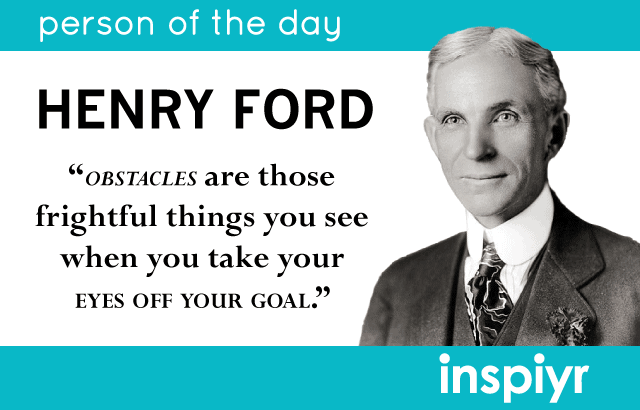 We see Ford cars zoom past us probably a hundred times a day. Everyone knows the Ford car company, an incredibly successful creation of Henry Ford’s. However, this company was not Henry Ford’s first.

In fact, Ford failed with not just one business venture, but two before the Ford car company took off.

Though he endured these blows to his confidence, he kept his eyes on the goal and tried again, and again. Finally, he succeeded with flying colors, and even over 60 years after his death, his company is still a household name.

Failure is inevitable, because we are only human. But as Ford has said, “Failure is just a resting place. It is an opportunity to begin again more intelligently.”

Which will you choose?

6 Tips for Reaching the Height of Your Physical Well Being