Top Posts
24 Things That Will Make You Laugh (Even...
How To Deal With Bitter People
Having Family Problems? Here’s How To Fix Them
20 Easy Ways to Protect the Environment and...
5 Surprising Benefits of Training Your Glutes
5 Reasons Warm Weather is Good For Your...
8 Ways To Have A Super Relaxing Weekend
The Importance Of Being Grateful
QUIZ: What Workout Are You?
7 Healing Foods That Boost Metabolism
You are Here: Inspiyr > GET MOTIVATED > Why You Shouldn’t Be Afraid to Fail

Why You Shouldn’t Be Afraid to Fail 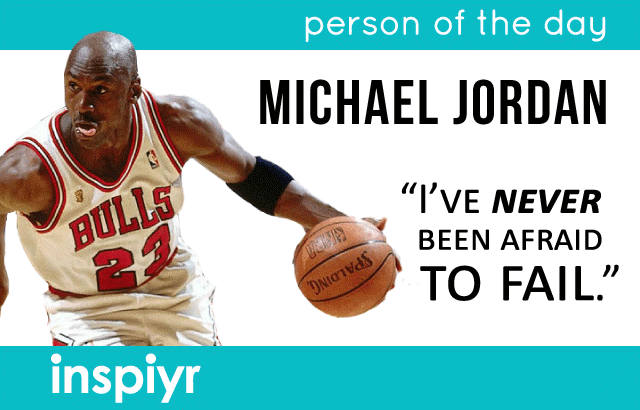 Michael Jordan: the face of basketball. Seriously, is there any basketball player more famous than Michael Jordan? It’s hard to picture a time when he wasn’t amazing at basketball–like he came out of the womb dribbling down the court. He’s associated with pure success in his sport.

However, Jordan struggled in high school. In fact, he was actually cut from his high school basketball game. But Jordan actually cites his failures as the reason why he’s succeeded. He once said, “I have missed more than 9000 shots in my career. I have lost almost 300 games. On 26 occasions, I have been entrusted to take the game winning shot, and I missed. I have failed over and over and over again in my life. And that is why I succeed.”

When you fail at something–and because you’re human, you inevitably will, just like the rest of us–don’t let that be the end of your road. Let it be the vehicle to your success. Let your shortcomings be your inspiration to do better…because even the best of the best don’t succeed straight away.

20 Things We Should Say More Often, According to Kid President