Top Posts
24 Things That Will Make You Laugh (Even...
How To Deal With Bitter People
Having Family Problems? Here’s How To Fix Them
20 Easy Ways to Protect the Environment and...
5 Surprising Benefits of Training Your Glutes
5 Reasons Warm Weather is Good For Your...
8 Ways To Have A Super Relaxing Weekend
The Importance Of Being Grateful
QUIZ: What Workout Are You?
7 Healing Foods That Boost Metabolism
You are Here: Inspiyr > GET HEALTHY > Want to Gain Muscle? Eat Your Carbs!

Repeat after me: Carbs Aren’t Evil!

Carbs tend to get a bad rap, but there is nothing intrinsically wrong with them. Rather, “carb abuse” or loading up on low-quality carbs morning, noon and night is the real problem.

Along with eating the right carbs, it’s important to eat your meals at the right times throughout the day. Over the past few years, more and more evidence has shown that the timing of food is equally important, if not more than, the amount you eat. A 2007 study performed by the American Journal of Clinical Nutrition found a significant modification of body composition including fat loss with individuals consuming their daily calories within a restricted time window versus eating the same amount of calories throughout the day.

But how do you get all the benefits of carbs withoutall the bad? It’s really not that hard, but it will take some discipline and proper timing on your part, especially when you introduce carbohydrates into your body.

How to Eat Carbs and Build Muscle

Carb timing is critically important. Carbs are for building muscle, so you should eat them after working out. Before you workout, your body isn’t ready for carbs. Introducing carbs when your body is not ready basically signals it to store fat. Do not do this.

Don’t combine fat and carbs. Bad things happen with both of those are in your body at the same time.

Insulin is produced by the pancreas and released when carbohydrates (as glucose) and proteins enter the bloodstream. Its primary function is to regulate blood sugar levels by increasing glucose uptake and storage in the liver, muscle and fat tissue.The stored glucose can then be used as an energy source when blood sugar levels drop. While insulin’s role in the body is extremely important for us all to function, it can be a double-edged sword when building muscle and re-shaping your physique.

The negative aspect of insulin for those looking to pack on lean muscle is that the release of insulin from the pancreas immediately stops the body from burning fat as an energy source.

On the positive side, insulin can be responsible for helping your body build bigger muscles due to its anabolic effect. It enhances protein synthesis and amino acid uptake to muscle cells, and it increases blood flow to aid in faster muscle cell repair and growth—all stuff you want to happen when you’re trying to pack on lean muscle. Insulin also inhibits the catabolization of your protein, which just means that it saves your muscles’ prime source of growth from being converted to energy and burned by the body as fuel.

The Importance (and Simplicity) of Strength Training

Final thoughts on gaining muscle: People make lifting weights too complicated. At its core, it is really simple: lift a heavy thing as many times as you can. Repeat.

Of course, proper form is critical to building muscle without injury, but form doesn’t matter if you’re too overwhelmed by all the “do this and don’t do that” that accompanies a lot of complicated workouts.

Here are some tips to pack on muscle when you’re working out, so you can put those good carbs to work!

3. Don’t use momentum or gravity – Make sure you control the weight, not the other way around.

4. Stick with it – building lifelong muscle takes time and consistency.

5. Have fun and ignore everyone telling you your approach might be “flawed”. Trends pass and fads fade.

Remember to use carbs to your advantage in gaining muscle! 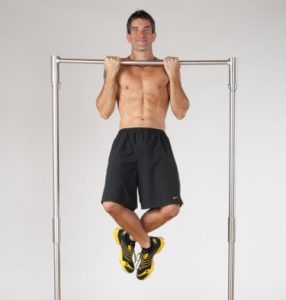 is their fifth book in the popular “7 Weeks to Fitness” series. Find out more at 7WeekstoFitness.com.

You Can Do It! 12 Steps to Eating Healthy at Restaurants

Why Multitasking Isn’t Good For You